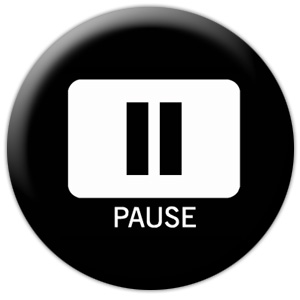 A Powerful Little Word, That

My new favorite word is ‘pause’- especially when it’s used in place of the word ‘stop.’  We’ve been discussing this a lot lately at our workshops- in a lot of different settings.

Consider, for example, a ‘rally-killer,’ a student who hogs the stage at exactly the wrong time: you ask for a piece of evidence that Jonas’ perspective is changing and he begins a long-winded and meandering rehearsal of everything he knows about the novel.  Meanwhile you’ve got a lesson to cover.  Honestly, you can’t let him go on forever. But saying, “Stop” is just a bit harsh, especially when the idea is to discuss your thinking, after all.  It’s a misdemeanor and a well-meaning one at that.  Saying, “Pause,” possibly followed by “I like your thinking but I want to let some other folks join in” or “but I really want to focus on the evidence for how Jonas is changing,” has a gentleness- a pause implies you might start up again, that you will continue at some point. Which is true.

It’s also useful in behavioral situations.  You make a relatively low level correction of a student and she reacts hotly, her words–exaggerating the situation, a bit defensive maybe–working her up into a state.  To tell a student in that state of emotion to stop is likely to get her more worked up. But “pause” has a calming effect.  As in: “Pause, Sara. Don’t get ahead of yourself. I asked if you had your book. I haven’t asked why yet. We haven’t discussed what we’re going to do about it if you don’t.  I just asked whether you have it. Do you?” Saying “pause” is like saying “time out.” Calms the student. Calms you too.

I noticed a top soccer  coach using it the other day too. One of the really important things to do when stopping a practice to make a teaching point is to be quick, to avoid over-talking and to get back to playing quickly.  Of course if players know you’ll be quick and then they’ll be back at it ASAP, they’re more attentive while you’re talking and you can make your point faster. It’s a virtuous cycle.  The coach used the word ‘pause’ to break the drill for a coaching point. As always, it implied that they’d be back playing soon. And it was a reminder to him. It set in his mind the expectation that his breaks would be fast.  And they were. “Pause,” he’d say.  “When you make that run it can’t look lazy like this.  It has to be sharp like this. With acceleration. Let me see that now. Play!” Result: his kids were locked-in attentive and his breaks were lightning fast.

I was reminded of the power of pause again today in our workshop on Writing for Reading.  Cristin from Capitol Collegiate in Sacramento was modeling inserting a writing prompt after reading and before discussion. After a student finished a paragraph she used the magic word: “Pause,” she said. “I want to know more about what Mr. MacGregor means when he shouts ‘Good gracious, a rabbit!’ Take one minute to write in your journals.  What does he mean by that?”

The word “pause” was perfect. It reminded students that they’d be back to reading soon and kept them looking forward to that.  But it also preserved efficiency. Since it implied “we’ll get back to reading in just a minute” she didn’t have to say that and she could transition smoothly and immediately into writing while the text was fresh in her students’ minds.

Yes, indeed, it’s a fine word, that ‘pause.’  So happy to have paused briefly here to admire it.

2 Responses to “My New Favorite Word”