As a profession we’ve made a pretty big bet on ‘instructional coaching.’  For good reason. It’s a statement about the importance of teachers–they deserve individualized support and guidance–and our faith in them–if we invest valuable leadership time in them, they will upskill quickly and meaningfully in ways that will result in more student success.. and just possibly make the work more fulfilling for them. It’s the right place to invest our energy.

But instructional coaching is hard to do well. I have seen a thousand sub-optimal iterations of it and I’m sure you’ve seen your share too. Good intentions and time invested are not enough. It needs to be carefully designed and well executed to fulfill its promise.

And that is why I love this video of Fran Goodship, a teacher and coach at Solebay Academy in London–part of Paradigm Trust–working with her colleague Delwar Hussain. There’s just so much that goes right here. Honestly it’s one of the best coaching videos I’ve seen.

Let me start with a few things that should happen but don’t always.

First, simply and obviously, they are looking at video of Delwar’s lesson. This is in comparison to most feedback session where the coach sits down and says, “Right, I watched your lesson on X and want to talk about Y.” Without the video to study the most the teacher can takeaway is: I should do more of Y. But when should he do more of Y? and why??

With video the teacher can learn to read the classroom signals that caused the coach to say that Y was an issue: the pupils were quiet, or confused, or unruly or anxious. Whatever the cause, the key to using feedback is connecting it to a signal in the classroom that tells you it’s the right move at a given time. Only video does that.

But even when they are watching video coaching sessions often don’t work well. That’s because for my money the most common first question from coach to teacher is: Well, what did you think?

That seems like a great question but it makes it difficult to address an issue the coach thinks is important genuinely. If the teacher names the wrong issue we talk about it quickly but obligatorily, frankly. It eventually becomes clear that the purpose of the question was to make them guess what was on our mind. We do that because we want a conversation but it often results in a mildly disingenuous one.

That’s why I love what Fran does here. She names the issue to draw Delwar’s attention to it at the outset. “When we’re watching this, what I want you to look at is the questioning that you pose before you use “talk to your partner.””

Now he will be watching his questioning while he’s viewing the video instead of finding out afterwards that it was what Fran thought they should talk about. At that point he would be less able to engage the discussion because he would have been unlikely to have been watching for those issues carefully from the outset. By steering his attention at the outset to the relevant topic she sets him up for success because he learns more from watching the video.

And then, in the master stroke, Fran goes one step further. She feeds background knowledge into the conversation: “Before we look at it, I just thought if [we could] back to a piece of research…it might help you understand why this is an area of development.” Then she proceeds to review Barak Rosenshine’s guidance on teaching in small steps in consideration of students’ working memory.

You can see Delwar engage right away. He remembers Rosenshine and is instantly thinking about applying it. His interest perks up visibly and he seems to be thinking: “We’re going to be applying something I know about…” It’s a confidence boost. By knowledge feeding… sharing or reviewing a key piece of background knowledge before the video… she allows him to use it to analyze and process the video at a higher level.

And it works beautifully. “Ok, I’ve got it already. Just stop [the video].” Delwar says. “It’s cognitive overload in terms of the amount of questions that i’m asking.” He’s reading the classroom for himself and has seen the cues that tell him what he need to adjust. He’s off and running with solutions and all Fran has to do is steer him and bit and set up a bit of practice to help encode the shifts he identifies in long-term memory.

When I watch this video I think of this video of Christine Torres’s classroom:

As I wrote in a previous blog post, Christine’s students are incredibly engaged because, she starts by giving them knowledge–the first thing she odes is define the word caustic instead of asking students to guess it–and then she asks them to apply it to solve problems and to think about their world. And they love it, in part because the playing field is leveled. Interesting questions are asked that everyone can attempt to answer because they have the knowledge to engage.

And really, even though Delwar is a successful and motivated third year teacher, it’s that same for him. Having clear knowledge to apply from the outset makes it more interesting and engaging for him. He genuinely enjoys the conversation.

I’ve tried to capture that in this illustration. 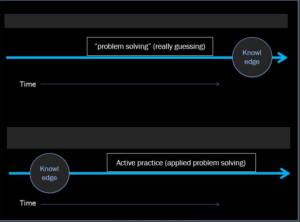 When we ask people to “discover” the answer it often results in guessing, which is not critical thinking and not especially fun. When we give people bit of knowledge (the answer) at the outset and then let them wrestle with how to adapt and apply it in a challenging setting what they are doing is actual problem solving. And it’s fun and motivating. For teachers as well as students.

It’s funny, isn’t it, that we’ve somehow let ourselves be convinced that knowing things will dampen curiosity so we should hold it back. But it’s the opposite. Knowing things increases curiosity and Fran and Delwar here show that knowledge-based conversations even among teachers are more interesting and engaging.

There are lots of things I haven’t discussed that are relevant here as well- the culture of trust and appreciation between Fran and Delwar, the culture of practice that results in action and rehearsal right away. But for me it’s all about what Fran does in the first 30 or so seconds of this video. Show a colleague video. Focus his attention on a key idea. Infuse background knowledge to enrich the discussion. So simple. And so utterly different from what often happens during instructional coaching.